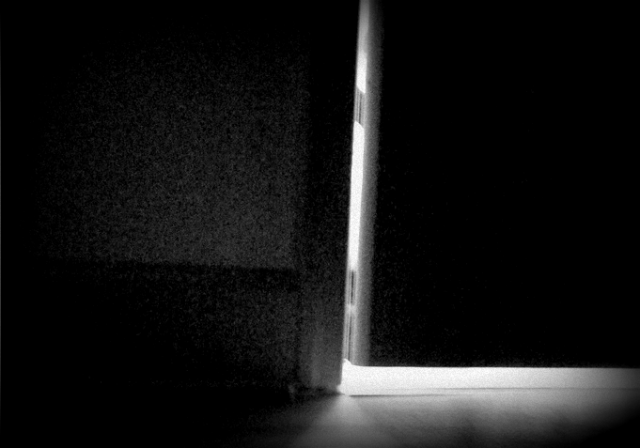 I have traveled far searching for what haunts me most, only to find it in my home.

I’ve always believed that evil constantly surrounds us. At a minimum, we keep it at bay by choosing not to believe, but not believing doesn’t make it less real. It just stops us from calling it by its true name. Instead we call it bad luck, or when a foul chill drifts by it’s because of bad heating or perhaps the flu bug is coming on. But I know it is real. I have a six sense about evilness. I can see its true form of hate-filled blackness and shifty red eyes that target your soul.

Call me old fashioned or even superstitious. I know exactly where it is, and I don’t have to travel far to experience it.

I know this sounds crazy, but I have sensed evilness in my closet. I feel like there is a doorway to another realm in the far corner where the two simple drywalls meet. On the surface I try to play it off and blame it on seeing one too many horror films. Yet underneath the surface, deep within my psyche, my sixth sense tells me the real truth. Evil is real and lives there.

But also in my crazy-can’t-explain-why reasoning, I believe by closing the door, especially at night, keeps the evilness locked away in that dark dimension. That one simple act of closing the door is acknowledging evil and telling evil it’s not welcomed here.

I feel reassured at night when I look across the dark room and see the door is closed. It’s like I’m sending a universal warning sign to the unholy realm. I can breathe easier and close my eyes, knowing I’ve held evilness back again.

Yet life is never easy. It has a way of coming at you in all directions and engulfing you completely. It’s more like a continuous tidal wave of chaos in constant motion. Sometimes you can make it through the chaos, when it’s only one day out of seven, but every now and then it slams at you in four or five days in a row and you can’t catch your breath. You revert into fighting for each minute of your life and stomping out fires just to survive.

I try to set routines throughout the day and into the night in hopes of keeping on schedule to achieve my daily goals while praying that I leave no detail unattended, trying to stay ahead of the tidal wave of chaos. Yet life always throws a curve ball when I least expect it, leaving me scrambled and exhausted as I fight for each minute of the day. Routines and schedules go out the door. It’s hand to hand combat in making the madness disappear.

I’ve had those days of not knowing which is up or down, barely making it home to my place of peace. The only drive I have left is enough to strip off my clothes and make it to the bed.

On one those days I will remember for the rest of my life. It was a Thursday night and I was running on gas fumes, and I had no more fight left in me by the time I got home. I was on my fourth day of madness at the job. I did my usual when I got home. I stripped my clothes off right in the bathroom. I used a wet-wash disposable cloth to wipe off the remaining make-up and swallowed the last of my two day old merlot straight from the bottle. I was beyond a wine glass and striped of gentle manners. The only goal I had was bed as I prayed my cell would not vibrate one more blankie-blank time, to notify me that I had another urgent (only from the senders point of view) email had arrived.

The race was on–me hitting the bed before another *!@#* email.

I turned off the lights, left my phone in the bathroom and fell into my bed. I won! There were no dreams, just straight unadulterated sleep. I turned everything off mentally. I was out like a light in less than two minutes. The clock read 10:33pm before my eyes closed.

The next thing I remembered was a cold chill across my face. I awoke with a horrible feeling like it was time to get up, but my body still felt like it had just fallen asleep. I looked over at my clock with cloudy eyes and its blueish green numbers read 3:33am. I was relieved. I had two more hours of sleep.

I rolled over and pulled the covers up over my shoulders hoping to return back to sleep when I noticed my closet door was wide open, but not all the way open where I could see my whole closet. I would have preferred that. Nope. It was open in such an angle which left more than half in complete darkness with a crack at that narrow area where the door met the hinge, the place where you warn children not to put their fingers. That narrow scary space was a straight two inch black line of darkness, leaving whatever it was inside my closet a prefect view of me and leaving me a perfect picture of a nothing but a sense of something watching.

My cloudy eyes became perfectly focused on what was behind the door, as my mind raced back thinking about each step before I fell into my bed. There was no way in hell I left my door open and especially not that far open.

My mouth went dry and my heart started pounding in my chest. I was paralyzed by fear.

Doctors want to call it ‘sleep paralysis’. That’s when a part the brain is still asleep, leaving you unable to move, but awake enough to grant you vision. Old folklore call it a “witch is riding you” because usually the brain sends a hallucination of something holding your body down to explain its immobility.

The problem with that logic was I just moved, and secondly, I was missing the hallucination. I had no witch sitting on my chest. But what I did have was a door slowly moving open, allowing the crack to be even wider and the smell of sulphur getting stronger.

What stirred behind the door left me screaming, and since I lived alone, the scream fell only to my ears and somehow I felt this satisfied the evilness behind the door. What came from my closet was darkness wrapped in an oily coat of more darkness. It had no true form unless you call a ghostly image a form. It didn’t walk; it slivered around the corner causing the door itself to become darkness as it passed by.

That thing, I couldn’t call it the devil, but it did have devilish intentions. I felt it in my soul, my sixth sense told me it had been waiting to come out and play. And now it was out and able to make its fantasies come to pass. Screams from hell filled my head and scratched at my eyes as I stared unable to look away, unable blink. That thing smiled, an inky black nightmare, and continued to slither forward.

All I could think of was, “Close the damn door, that one simple act.”

I felt the evilness enter my pores of my skin as it slid up my legs inching closer to total control.

“Close the damn door!” my mind screamed as my mouth continued to holler in pure horror. The pain from the creature was excruciating. The thought of that pain being inside of me and entering from below. I knew it would tear me apart.

My nightmare was real. I felt the first of the blinding pain inch between my legs. There was nowhere to run, my fight was almost over and yet the games were just beginning.

“Close the damn door,” echoed in my brain as I bit down gridding me teeth trying to stay conscience. I did not want fall into his realm. I was so close to losing the fight as the pain inched up past my stomach. I watched in horror as my chest rinsed and fell like I was about to dry heave. I was being swallowed whole by evilness.

This was my final coherent thought. My mind and body were as one. I screamed, “Close the Damn Door!”

My words were my will.

The damn door closed and the lock fell into the socket on the frame, my nightmare was over. The evilness was gone. I was alone completely soaking wet, spread-eagle on my bed with my heart beating a migraine into my head. I was alone, breathing as if I just run a marathon. A chill ran across my body. I was in a cold sweat from head to toe. I quickly pulled my feet beneath me and pushed myself as far up to the headboard as possible as I looked back at the closet door.

I looked over at my clock wondering what had just happened. I was completely spent, yet at the same time ready to fight to the death if it meant not feeling that pain again.

As my eyes focused on the dark blueish-green numbers as they changed to 3:34am.

Did you enjoy this story?

My paranormal romance ETERNAL TRACES is free for Halloween. Get your free copy. 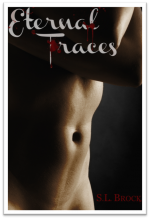 I'm a southern in my heart and a northern in my soul. I've had a few bad wines, but for the most part I've enjoyed enough good wines that it makes up for the few bad bottles. I enjoy writing, but more than writing itself, I love telling a good story, taking my reader off on an adventure starting with "What If"…. I'm a sucker for the Paranormal Romance genre. To me, its nice to be released from "What Is Expected" and believe for 250 pages in "What If's". Its like a vacation with out passports, waiting in line and an expensive credit card bill when you return home. An additional note: I've started another blog page for Home Care. I know the two are unrelated, but in my world they are. My paying job is 100% dedicated to Home Care and educating families on their new journey. One of my favorite quotes, I leave with all of my clients. "One's destination is never a place, but a new way of seeing things." - by Henry Miller Please Enjoy, but more importantly Stay Inspired…
View all posts by shondabrock →
This entry was posted in Evil, Free reads and tagged #amwriting, demons, evil, ghost story, Halloween, horror, incubus, paranormal, pnr, poltergeist, scary, short fiction, short stories. Bookmark the permalink.